When starting any game regardless of starting conditions, players are given an Ark. Arks cannot participate in combat, and cannot be destroyed in any way, but they can relocate to pre-determined locations on the map (the relocate icon in upper right corner). The Ark has zero maintenance cost or energy requirements and has no effect on the Ecobalance.

When starting Anno 2070 you will have a standard Ark, but by earning career points and equipping it with upgrade modules in-game you can improve its support role dramatically, and even choose its model and appearance. E.V.E, your trustworthy advisor is installed as a standard part of your Ark, and you are its captain. 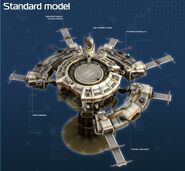 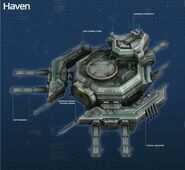 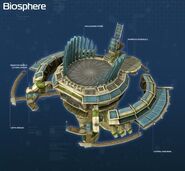 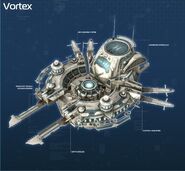 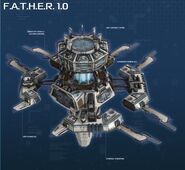 Note: Politics powers are only available in Continuous gameplay and are disabled in every other game mode.

There are three tiers of improvements you can get for your ark (rarity 1-3). You can have a total of three improvements of each rarity. In some cases, you will need a specific career rank to be able to insert more upgrades. Typically, you start with three unlocked slots for upgrades with rarity rank 1, 2 open slots for upgrades with rarity rank 2, and 1 slot for rank 3 upgrades. These upgrades are items just like you use on vehicles and warehouses. You can easily see that it's an ark item if it has a red symbol in the corner, as opposed to blue for vehicles and yellow for warehouses.

There are multiple ways to acquire upgrades. You can get them by going on successful expeditions with a coordinates item, by completing quests, or buying them from third parties. You can also research them in your Academy. A cheap and easy way to obtain Ark upgrades is by playing a continuous game on the easiest setting without opponents, and then building a large number of academies in your tech city. The obtained upgrades can then be used in other, harder games.

Equipping all sockets in the ark upgrade menu earns an achievement, and the title Mad Scientist. This can be earned even before all sockets have been unlocked; just fill the sockets that are available to you.

There's an exploit in the Ark which makes it possible to buy a endless amount of commando ships. To do so, simply buy a commando ship and then quickly move the Ark to a new location, and repeat the process. You can keep doing this until you have as many commando ships as you like. For more details, see the Exploits article.

There is also another exploit involving the Ark. If you store any product (eg. Diamonds), save your game, move the goods to Ark storage, then exit and reload your save, the goods will have duplicated, with the original still in normal storage while the duplicates are in your Ark. This works just as well with any item, though blueprints can only be loaded one at a time.