Disasters are temporary events with great negative consequences. There are three kinds of disasters in Anno 2070: City Disasters, Environmental Disasters and Technological Disasters. On this page, you will find an overview of all of them.

Disasters got their own soundtrack called "World's End", which is especially played during a tornado.

NEW! If you have the Deep Ocean Expansion, there will be a new reward on each faction's Career Ladder which gives you a formula that will provide ALL your inhabitants complete protection against one of Crime, Fire, and Disease. However, to obtain these new rewards, you need 2100 Career points for each and every one of them when you start building up on the 13th and final step on the career ladders.

If you have too few or no active Fire Stations in your city, your houses may catch fire. The houses will eventually burn until destroyed, and sometimes they will also explode, initiating an Inferno, where a substantial number of houses are burning together, or in the worst-case scenario a Blaze, meaning that more than 15 houses are burning all at once. The Blaze will continue until it is either extinguished by a fire station or the fire units of a Repair Dock, or peters out, generally having destroyed gigantic parts of the city, sometimes up to 30 houses. The houses can however be saved by a Fire Station. As with disease and crime, it is possible to reduce the risk of fire on your island by building multiple Fire Stations. For Techs, using Safety in Research channel on the Information Center reduces the risk of fire by 100%. Fire can also be effectivly stopped by using the eco Shield Generator, though this can be expensive in the long run.

If you have too few or no active Hospitals in your city, your people may suffer from disease. Sick people will leave your city until no more people live in your residences. Sick people can be cured by a Hospital.

The probability of disease depends on how many hospitals you have on your island. It is possible to bring the chance of this disaster down to 0%, but this requires a lot of hospitals. For Eco players, it is much cheaper to use Check Up - The Consultation channel on the Education Network.

If you have too few or no active Police Stations in your city, crime can arise in your city. Robbed people will leave your city until there is just 1 citizen left in the house. Unlike the disease disaster, houses will not turn into ruins. However, criminality spreads quickly: if it is not stopped quickly, the entire city may be affected by it. Criminality can be stopped by a Police Station. As with disease and fire, it is possible to eliminate the chance of crime actually occurring in your city by building several police stations, but is extremely expensive in the long run. For Tycoon Players, it is much more efficient to prevent crime using Neighborhood Watch channel on the Ministry of Truth, which reduces the risk of crime to 0%.

It may be important to note that upon attaining Geniuses, crime as a disaster immediately unlocks but the police station will not unlock until the first executive of any of the two other factions arrive on the island. This means that crime will be impossible to fight unless one attains executives before geniuses, at which point the police station unlocks like it normally does.

Respiratory Ailment is caused by smog (which itself reduces satisfaction). It greatly reduces your Inhabitant's satisfaction and can be linked to an outbreak. It is mitigated by hospitals.

For the main article, see Uprise.

Civilians may riot in conditions of low satisfaction, high taxes, and/or high population levels. Civilians will also occasionally present the player with ultimatums such as a demand to destroy a Nuclear Power Plant, and they will riot if these are left unfulfilled.

Acid Rain reduces the productivity of farms and production plants by 50%. Farm fields can be completely destroyed by the rain. This only occurs at a disastrous ecobalance(-500).

Acid Soil is not really a disaster but it reduces productivity of farms by 1% for every 10 points below negative on the Ecobalance. Acid Soil especially affects Eco farms such as the Tea Plantation.

While rare, tornadoes do appear in the game and cause devastating damage to buildings on the island. The damage inflicted by tornadoes can be effectively mitigated by the use of Eco Shield Generators.

The chance a tornado might appear is affected by the global Ecobalance of the map, however a positive or neutral Ecobalance does not necessarily mean a tornado cannot happen. The probability of a Tornado will significantly increase when one or more islands drop below -200 Ecobalance, or the Ecobalance in a sector drops very quickly.

Tip: When a tornado appears, it will most likely go for the most polluted island in the sector. An island with -500 Ecobalance is much more likely to get hit by it than a island with -100 Ecobalance. Try to build some islands where you purposely decrease the Ecobalance, just so that you're able to distract the tornado from causing any damage on your main islands. However, the best way of avoiding the tornado is still raising the Ecobalance above 0.

For a continuous game you can minimize the chance of a tornado by doing the following:

An Oil Spill is caused by an accident on an Oil Rig. The Oil Rig will catch fire as a consequence of the accident. After sustaining heavy damage from the Fire an Oil Spill will occur. The Oil Spill will slowly expand from the Oil Rig towards a nearby Island and will cause a Black Tide on that Island upon reaching it, instantly incurring a -500 Ecobalance penalty. If left unattended the ecobalance will eventually sink to -999. The Oil rig will eventually burn until destruction.

You can prevent the Oil Rig from being destroyed by extinguishing the fire in time. Even if the Oil Spill already occurred, but the Oil Rig hasn't been destroyed and you manage to put out the Fire, the Oil Spill will stop from spreading towards nearby Island and the disaster will not occur. In this situation the spilled oil will eventually clear by itself. If the Oil Spill reaches an Island and Causes the oil spill, you can clear the Oil Spill near the Island's shore by using the Effluent Pump module which can be researched (constructed) in a Laboratory. To put out a fire on an Oil Rig you need an Emergency Equipment module which can be researched (constructed) in a Laboratory as well. It is also possible to use the Firebird's bombing run ability on a burning oil rig, to instantly destroy it without causing any further negative effects.

In addition to the significant Ecobalance Penalty the Oil Spill Disaster will cause a significant Productivity Penalty to the affected Fisheries.

A Black Tide being cleaned up by a boat.

However, should a Nuclear Fallout event occur to an NPC, the consequences will be much more noticeable as that NPC will become impossible to defeat because of the Nuclear Ruin.

The game settings affect the probability of accidents meaning that you will receive fewer and less severe accidents on Easy difficulty (specifically on the Technological Disasters setting) than on Hard difficulty settings. On Hard it has been proven that each Power Plant will experience at least 1 accident per hour, where 1 out of 10-30 accidents is a Meltdown, and 1 out of 50-100 is a Fallout event. (Note that these statistics may be unreliable, since this was only demonstrated with the 1.03 Patch-Note.) The easier the Technological Disasters setting is set, the rarer Fallout events become.

Protection of a Nuclear Power Plant is possible by building two Eco shield generators nearby. This will prevent some of the devastating effects of a "Nuclear Fallout" disaster, making it comparable to an "Imminent Meltdown" by giving the -500 Ecobalance penalty but not reducing the plant to a ruin, and allowing the surroundings to be built upon.

It is also noteworthy that if "Nuclear Fallout" takes place in a Nuclear Power Plant that is not in the influence area of a Warehouse, you can still build upon the surrounding area.

A partial Nuclear Fallout event can caused by having the Power Plant damaged either by an enemy or by allowing it to decay through making it neutral. Upon reaching 0 hitpoints, the Plant will stop functioning and turn into a Nuclear Ruin, incurring the permanent -100 Ecobalance penalty. Fallout caused by damage like this will however not result in any other consequences, though the ruins will be impossible to remove. It will also still be possible to build other buildings inside the influence area of the Power Plant.

When Nuclear Fallout occurs for the first time, the player will receive an Achievement:

Nuclear alert after an incident 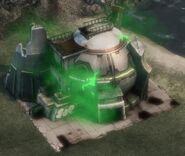 Radiation effect after a Nuclear Disaster

The warning you receive at the tool bar when a Minor Accident occurs at one of your Nuclear Power Plants.

A Research Accident can happen at a Laboratory during a research. The probability of an accident is indicated by the Development Risk value (

). You are able to reduce the Development Risk by usage of appropriate Warehouse and Ark Items. There are 3 levels of Research accidents:

The Tsunami is a disaster only available in the Deep Ocean expansion. A Tsunami is created when a Geothermic Power Plant collapses. The power plant is destroyed in the process. The resulting wave moves outward in an expanding circle, so the islands affected aren't chosen randomly. The Tsunami is able to destroy harbors and ships near the coast, while ships and submarines in the deep sea are unaffected. The wave is blocked by mountains, so rocky islands may be shielded from the full effect. When a Tsunami has flooded the land, it becomes temporarily unbuildable (much like Nuclear Fallout, only with a shorter duration). You must wait until the water recedes in order to rebuild.

You receive a 10-15 second warning of an impending Tsunami. This time should be used to move ships away from the shoreline, saving them from certain death. It may be possible to build your Geothermic Power Plants and settle islands strategically in order to minimize damage from a Tsunami. Simply choose building sites that put mountains between your settlements and the power plant.