The Distillery is first encountered in the single player campaign (and in fact the demo) in the second mission, where it is needed to level up your Workers to Employees.

In terms of economy and gameplay, the distillery is very similar to the Cider farm of previous game Anno 1404.

One Distillery can provide the following number of inhabitants with sufficient amounts of liquor:

Trenchcoat always offers 12 credits a ton for liquor. Having a surplus is recommended with Trenchcoat.

These layouts show the most efficient ways to place liquor farms:

These upgrades aren't researchable; you have to find / buy them.

3 distilleries to satisfy a sizable population

Close up of Distillery with 4 fields 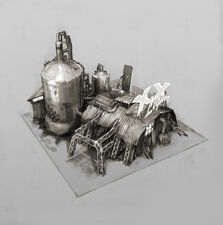 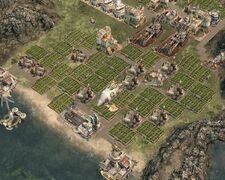 A distilleries zone with an ozone generator in the sky , near a tools production zone
Add a photo to this gallery
Retrieved from "https://anno2070.fandom.com/wiki/Distillery?oldid=45112"
Community content is available under CC-BY-SA unless otherwise noted.