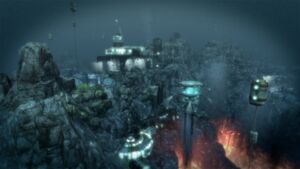 E.T.O. is the abbreviation for the Ebashi Trench Observatory, which is Hiro Ebashi's underwater base and observatory. Ebashi created E.T.O. after a long dispute within S.A.A.T. about a budgetary shift towards research of new and more advanced technologies, especially military weaponry. When fellow researchers, among them Dr. Salman Devi, didn't agree with him, Ebashi left the Academy and created his own research facility.

After Ebashi had founded E.T.O., he spent most of his time underwater in his base researching a new technology that could be used to produce huge amounts of power. His research eventually resulted in the discovery of Geothermal Energy and the Geothermal Power Plant, sparking the storyline for the fifth World Event (The Secret of the Ebashi Trench) in which the player help Ebashi and Devi building the first prototype of the Power Plant.

E.T.O. in the Deep Ocean Expansion[]

In the Deep Ocean expansion, E.T.O. continues their research on the new Geothermal technology, which eventually resulted in one of the prototypes to collapse, creating a tsunami which destroyes the settlements of Tilda Jorgensen and Vadim Sokow during the mission Illusion's End. With the help of the player, E.T.O. researchers develop a technology that is able to prevent a similar disaster from happening again.