Hector is a non-expanding NPC who is the leader of the Barracuda League, a minor pirate "faction". He is very aggressive; his nickname is The Pirate.

He is voiced by Tom Clarke Hill.

"Most of the others have problems forming a proper sentence when talking to those white-collar politicians and business people! So I speak for them. See, I'm one of the few in the Barracudas who's had anything even near what you could call an education."
—Hector

Nothing is known about Hector's background except his dislike for the modern society. It is known, however, that Hector is the brother of Scorpio, another very aggressive NPC who only appears in the World Event Atomic Terror.

Hector doesn't appear in the Campaign.

At the beginning of the game, Hector is always at war with you. He'll never settle any islands apart from the base he is given at the start of the game, called "Barracuda Bay", "The Cluster" or "Pirate Harbor", which has 5000 hitpoints. This base is protected by non-respawning gun turrets, vulnerable to hit & run tactics. He has two types of turrets: 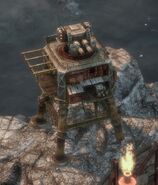 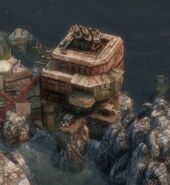 The only ships Hector employs are Raiders and he builds these periodically. These ships are faster than all trading ships without boosters. He is cautious and will usually target trading ships and other undefended soft targets first, patrolling around his base until he believes he has enough ships for the job. Operating like a hive-mind, if you attack one of his swarming Raiders, the rest will instantaneously convene on your position to counter-attack.

Should he be able to sneak up on one of your trade ships with a Raider he will sometimes commence boarding it rather than destroy it, asking the player for a ransom to let it go. He demands the ransom just as the boarding starts, rather than finishes, usually leaving the player with enough time to intervene with their warships, interrupting the boarding attempt. If you did not manage to kill the boarding ship or didn't pay the ransom he will move the boarded ship to his base. Afterwards, when at Peace with Hector, he will allow you to buy the ship back by clicking on it. He also boards computer players who he is at war with and you can find some unique ships there sometimes.

It is possible to make peace with him by offering credits: the higher the amount, the higher the chance he will accept it. If he does, he will periodically demand "protection money" of 3000-15.000 Credits lest he declares war on you again.

While at peace with him, you can buy ships from him which he has boarded and captured from either you or other players / NPCs as said. The price of those ships, however, is a lot higher than normal. You can also sell ships to him by using the leftmost icon on ship's action tab. Prices he offers are lower than the cost of manufacturing the ships, with exception of Viper, which can be sold for the price of Colossus (which is probably a bug, present in v.1.05).

He usually sells the same items that his ships might drop and he sells them for 10% less than other NPCs. He is however also paying 10% less for items brought to him.

Note that Hector won't stop stealing cargo from your trading ships while at peace. He usually will take any Tools found on-board.

If you defeat Hector, you'll be able to recover his technologies so you can build your own Raiders. Note that this only applies to the game you've actually defeated Hector in.

It is rather easy to hijack Hector's Raiders. When Hector is at war (Usually with Vadim or other players) his ships will travel far out. Equip your ships with Hijackers and target isolated Raiders with your warships to hijack them and add them to your fleet.

Interaction with other NPCs[]

Hector dislikes almost all other NPCs, with exception of Trenchcoat and Leon Moreau, whom he'll protect.

Hector likes you to build and/or board many ships and he greatly appreciates you declaring war on or defeating NPCs other than Leon Moreau. Having a weak fleet or destroying one of his ships will lower your influence with him.

Once you start a war with Hector he will occasionally rally all his troops and attack, which can be a sizable fleet if you have been at peace with him for a while. Using detonators (Developed at the Laboratory) on his fleet is a good way to thin out his troops.

An even easier way is to take two Firebirds to his main island (while still at peace, so he won't fire at you) and use their bombarding special ability to take out his main building with 5000 hit-points. Since the bombing raid does ~3000 damage, you can defeat Hector in one swift stroke, without even declaring war on him.

If you have the Tycoon faction and you have 1400 executives you can build a Missile Launch Pad and shoot a nuke at him. This is a very safe way but it will cost a lot of resources and money so make a stable economy before doing so.

Playing Eco if you choose not to build up an air force but have a sizable fleet including 3 Orca's, you can whittle down his fleet - if - you keep on top of it. Then use the Orca's to blast his base. Should be enough unless your aim is off a bit keep your fleet on just out of range on stand by.

Alternatively, you can use ID anonymizers, and hijackers to slowly build a fleet higher than the fleet limit, The 300 HP ships are usually cargo thieves, so try to take his stronger ones and leave him with weaker ones.

You are able to use Hectors's portrait, his Player Color (Red), and the title "Pirate" as your in-game appearance by gaining the achievement "Violence Begets Violence" and thus defeating him on the Hard difficulty level.