"I am not afraid of standing up for my ideals. Are you?"
—Leon Moreau

Leon Moreau is the leader of the Green Offensive, a militant activist group that wants to see a perfect ecobalance on every island. His nickname is The Activist.

Leon was originally a Global Trust employee, working at Global Trust Nuclear Power Plant 7. Because Keto once said he "still" enjoys fighting, and that he never displays any knowledge of nuclear physics to the degree of an engineer, he may have likely been a security guard. The power plant was built close to the edge of a city where workers and employees lived. Without any safety protocol in the warehouse of that island, the reactor had increasing minor accidents until it eventually caused a nuclear fallout. The disaster was one of the worst in the history of Global Trust, as the only other accident Rufus Thorne can compare it to is the accident at Site 13.

"Every time the anniversary of the accident comes around, Leon goes slightly crazy."
—Tilda Jorgensen

Leon was not present at the plant when the disaster struck, but his wife and children died in the explosion. He was deeply affected and quit his job at Global Trust, after which he founded the Green Offensive. Although Seamus Green asked him, Leon refused to join the Eden Initiative.

Leon does not appear in the Campaign.

Leon Moreau will not build cities on his islands; instead, he only builds a complex harbor, an ozone maker, a shield generator, and he fills all the mine slots with monitoring stations.

Unlike many NPCs, Leon won't issue a diplomatic penalty for settling on his islands. The player can ask him to abandon the monitoring stations for ¢5,000 each, or borrow his ozone maker (which is 25% more efficient than the standard generator) for -90 upkeep.

He sells mostly Eco-related items, and you can find all the Eco +25% production items from him, except for pasta. On top of that, his prices are 10% cheaper when buying and selling items. In the Deep Ocean expansion, he can also sell Clearance Devices, which allow you to eliminate negative legacies on your islands.

Just like Tilda Jorgensen, he will give you an ultimatum to demolish your Nuclear Power Plants. The exact number of plants before he threatens with a war depends on his difficulty level. He is far more aggressive than Tilda; you will lose up to 50 influence points with him if a plant is built.

Interaction with other NPCs[edit | edit source]

"Vadim Sokow is a profit-hungry shark who has neither conscience nor scruples! Regardless of what he tells you, the truth is that it's all about his Oil sales and the Sokow Transnational share prices."
—Leon Moreau

Leon dislikes Vadim Sokow and will often give you missions against him. War between the two can occur, though their dislike of each other is usually played out through you, the third party. Even though Leon is an environmental activist, he can become a huge pain when you have him in a session with Vadim Sokow present on the map.

He declares war quite often with Vadim, and every time he sees an oil tanker, he immediately sinks it, which causes an oil spill. Ironically, this can cause a catastrophic ecobalance on any islands in the sector, as Vadim's oil tanker routes are random each time he collects his oil from his islands. Since Vadim usually settles several islands, and often in different parts of the map, all islands are in danger of getting an oil spill disaster because of conflicts between them.

Should Leon cause an oil spill on a neutral island or one that he has settled, he will eventually clean up the mess using oil disperses of his own. Counterintuitively, if Leon happens to sink an oil tanker near one of your islands and that island experiences an oil spill which will result in a catastrophic ecobalance, influence with Leon will decrease over time, depending on how long it takes you to to clean up the mess.

The oil spill can be cleaned up with the Effluent Pump, which you can research in your lab or Oil Dispersers purchased from the NPCs (Yana, Leon, Rufus, etc). The second option is the fastest one and you can purchase pumps that pump the oil such that you only need five to eight minutes for cleaning your shores.

Leon likes you settling his islands, making peace with Hector, going to war with Vadim Sokow and destroying his vehicles, building Eco warships (but not too many), building Eco buildings like wind parks and monitoring stations, and maintaining a positive ecobalance on your islands.

Having a large military, fighting with Tilda Jorgensen or Hector, building Nuclear Power Plants, and having a negative ecobalance on your islands will not please him.

You are able to use Moreau's portrait and his Player Color (Light Green) as your in-game appearance by gaining the achievement "Back to Nature" which requires raising an island's ecobalance above 500. 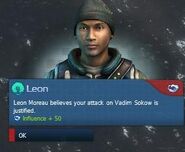 One of Leon's ozone generators in action
Add a photo to this gallery
Retrieved from "https://anno2070.fandom.com/wiki/Leon_Moreau?oldid=45385"
Community content is available under CC-BY-SA unless otherwise noted.