Insufficient precautions against accidents have a small chance of leading to a Nuclear Accident, which could take the form of a meltdown or in a worst case scenario, a Nuclear Fallout, which is the worst type of disaster in the whole game. An Imminent Meltdown will irradiate a large area and the buildings within it for a significant time, as well as lowering the ecobalance. If you are so unlucky that you experience the worst case scenario, a Nuclear Fallout, the whole Power Plant will explode into the air, instantly destroying all buildings within its influence area, and damaging buildings nearby the area of influence. The Nuclear Fallout will cause you to be unable to build in that area for a LONG period of time. However, you are far more likely to experience a minor accident (with no side effects). This may pose as a warning that safety precautions are lacking. See Nuclear Accident for more information.

Unfortunately, Eco and Tycoon residents alike tend to complain about having these on the islands on which they live. This will occur no matter what the actual chance of an accident really is; residents may issue Ultimatums even if risk-reducing technologies are applied. The consequence of ignoring these complaints is having a Demonstration during which all public buildings excluding monuments will shut down causing the dissatisfied population to leave for several minutes.

If Deep Ocean is installed, a very useful usage of Nuclear Power Plants is to set half a dozen (or more) plants on a small island and to send their energy to your most power hungry islands using an Energy Transmitter. Socket 3 Safety Protocol III (see Upgrades section below) in the warehouse to be 100% (120% actually) safe from accidents, and you'll have a cheap and practical mass production of energy. Feel free to use the island for any production of goods (tools, plastics, weapons...).

Both Leon Moreau and Tilda Jorgensen don't like that you build too many Nuclear Power Plants, and both of them have an ultimatum for you to demolish the power plants. However, Leon is far more critical to Nuclear Power than Tilda, and you will lose 60 influence with him for each Nuclear Power Plant you build. You will eventually receive a ultimatum to demolish it, from both Leon and Tilda, although Tilda is much less likely to give the ultimatium. (It was once stated that Tilda will only give the ultimatum on hard difficulty, that is false.)

Most upgrades are Research Projects available at the Academy.

There are also some Warehouse Items that affect the Nuclear Power Plant; these must be bought/found. 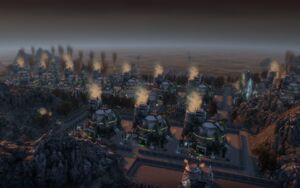 A small island with 16 Nuclear Power Plants and a Energy Transmitter producing 8231 Energy with 0 chance of meltdown (with upgrades). Highly efficient use of space! 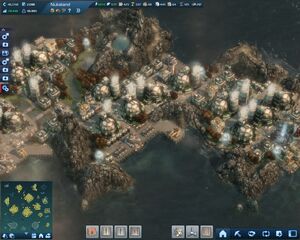 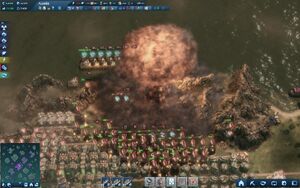 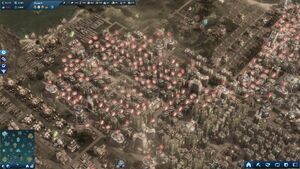 Radiation effect of a nuclear accident. 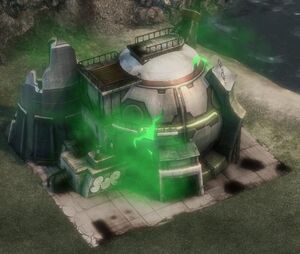 Destroyed Nuclear Power Plant
Add a photo to this gallery
Retrieved from "https://anno2070.fandom.com/wiki/Nuclear_Power_Plant?oldid=45606"
Community content is available under CC-BY-SA unless otherwise noted.