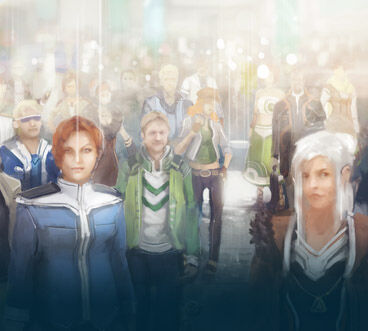 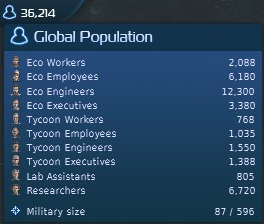 Population is a measure of how many Residents inhabit your current game. Global Population (all Islands) and Military size are summarized while hovering over the

Population icon in the upper-left hand corner of the display; as pictured on the right.

Total Global Population may also be located at any Warehouse, Depot or Port Authority in the upper-right hand corner, without associated summary or details. 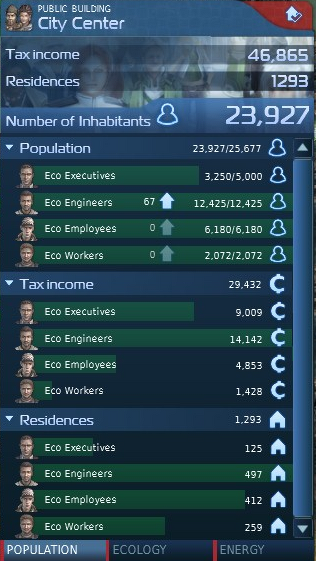 Population is also broken down on a per Island basis. Selecting a City Center or completed Monument brings up an info panel (as shown) displaying Global Tax Income at the top and Local Island-centric information thereafter.

Information is detailed according to Population, Tax income and Residences, which include fractions representing the current/maximum allowable number of Residents or Residences per level, ie: (3,250/5,000). At the bottom of the display are 3 separate tabs for Population, Ecology and Energy.

Note: Whenever Ascension Rights are Denied (set to Manual) and every condition to advancement is met, minor up-arrow icons will appear next to the appropriate Residence types, accompanied by a number indicating the amount of buildings which may be upgraded. These icons must be pressed manually to advance Residences to the next level.

There are a total of 11 Population Groups in Anno 2070 across 3 playable Factions: 4 for Ecos, 4 for Tycoons and 3 for Techs (2 without the Deep Ocean Expansion). Each Population Group in Anno 2070 allows for expanded construction options, but also imposes greater demands on the City's infrastucture.

are 3x3 building complexes in which your Residents dwell. These units are upgradable over time and will become more populous, advanced and visually impressive as their Inhabitants prosper.

Unlike other buildings, Residences can be rotated (hotkeys:,.) and their building model changed (hotkey:C) after being built. Upgraded Residences of the same faction and level link together when built adjacent to one another.

Residences are an essential part of Anno 2070. Residents consume Goods while supplying Credits through Taxation in return and are subdivided into ranks called Civilization levels, dependent on the Population of the rank below them (if any). Accordingly, the Eco Population settles in the Eco Worker Barracks. Tycoons inhabit the Tycoon Worker Barracks and Techs begin with the Assistants' Domicile. When the Population enters into decline so too will its Residences. If a house is left completely abandoned, it will be replaced with a Residential ruin.

indicate a requirement to satisfy the Inhabitants of your City. As a player, your primary challenge is catering to the Needs of your Population, which are quite simple at first, but will gradually become more complex as the Population advances to new Civilization Levels. Failing to provide for these Needs will cause Citizens to become dissatisfied and eventually leave the City, forcing Residences to decline until they inevitably become ruins. Care should be promptly taken or an out of control Deficit may lead to a Bankruptcy situation.

The several Needs which must be provided for include; Food, Drink, Lifestyle, Community, Activity, Information and Participation and may be divided into two categories -

These can be further classified as genuine Needs - necessary to maintain satisfaction - and Wants or Desires, which may be denied, by clicking on the Needs icon, through the corresponding Residence type's panel. This prevents Citizens of that class only from consuming the associated Goods, but also decreases Tax revenue generated by them. Generally, Needs consist of the Desires of the previous class, ie: Tycoon Engineers need Plastics, but Employees only want them; although need them to advance to Engineers.

In order to advance to the next Civilization level, all Needs and Desires of the current level must be fully satisfied and enabled.

Residences have an unlisted Need for Emergency Services, where both the chance of a Disaster occurring, and the necessary cure are unlocked simultaneously:

Every affliction has a chance to spread to nearby Residences and become more severe, depending on difficulty settings. Burning Residences will lose health until they are destroyed, while those affected by disease or crime will become dissatisfied, resulting in them moving out.

The following tables describe each Faction's Needs and Desires, Construction and Upgrade Costs, Ascension Rights and Population data. The first levels of Civilization start with only 2 Needs:

Deny Ascension Rights, which applies to all Residences of that particular Island, regardless of faction.

Ascension Rights icon to deny them those rights.

Any residence which has met the criteria necessary to Ascend will display a green upward arrow over the building, but only if that particular class of Residence has Automatic Ascension Rights disabled. Select the building and use the

The following criteria must be met in order to Ascend a Residence:

The minimum number of Residences required to advance to the next level is governed by the Needs for Activity, Information and Participation, which are all satisfied through the construction of Public Buildings. Furthermore, the total number of housing units of a particular class is restricted to a percentage of the previous class (as in Anno 1404). If there are insufficient Residences of a lower tier, no matter how well the Population is administered to, upgrading more units will be impossible.

To quickly upgrade a large number of Residences, use the City Center's Population tab and click the Ascension arrow next to the corresponding tier (holding the Shift key upgrades all Residences of that type). Note that the arrow will not appear if there are no houses eligible for upgrades.

Inhabitants increase the amount of Military Points available (also named Unit Limit and Military Size) based on their Population, Level and Faction. Points added by each type of citizen are rounded down before being added to the total Unit Limit. Eco and Tycoon populations are counted separately and the base Unit Limit is 10.

Why won't my City advance to the next tier?[]

Common reasons the Population fails to advance to the next Civilization level are that their Needs have not been satisfied, they are being Taxed too high, or the correct proportions of each class are not present.

The number of Level 1 citizens limits how many Level 2 citizens you can have and so on. If you have met every required condition for advancement but your Residences still fail to advance, try building more Level 1 Barracks/Domiciles in order to increase the limit on higher Population Groups.

Eco/Tycoon Executives will refuse to immigrate to the City once their population reaches 800, until their first Executive Lifestyle Need is met, then again at 1,200 until their final Executive Need is provided for. These Needs may be disabled at will, without causing Citizens to leave the City, but they are necessary for Population growth. Tech Geniuses have no such requirement.

Note also that the Needs of Tycoons are more drastically affected by the availability of Goods than other factions, which experience a brief delay before becoming discontent.