"Thor Strindberg. And what was your name again? Well, one thing is clear: we are not going to be friends."
—Thor Strindberg, defining himself in the game lobby

Thor Strindberg is the CEO of Strindberg Inc., a subsidiary company of Global Trust. He is an elite Tycoon known for producing 18% of the energy used by Global Trust Inc. He is the designated to be the "Player's rival", and thus he's very antagonistic and critical of everything the Player does both in the Campaign and in Continuous Games. His nickname is The Rival. His music track, "Grinding Teeth", can be heard when focusing on one of his islands.

"100,000 tons in 2 years is no problem at all, Strindberg.' 'Think of the schedule, Strindberg.' 'No delays, Strindberg.' 'We expect total commitment, Strindberg.' --- I can hear their voices... At night, when I'm tossing and turning in bed and can't sleep... [whispered] they're after me!"
—Thor Strindberg

Once, Thor Strindberg was a well respected Tycoon overseeing the expansion of Site 13, a prominent trading hub. It was his duty to make sure Global Trust strictly adhered to its two-year plan. As part of the Site's developement, a special turbine, designed by Dr. Tori Bartok's team was to be built for an existing Hydroelectric Power Plant at the site.

The special turbine was installed, but because of Strindberg neglecting advice, the dam experienced a critical failure and Site 13 faced disaster. Upon receiving news of the accident, Rufus Thorne fired Strindberg. He now wants revenge on both you and Dr. Bartok.

Appraisal in the Campaign[]

"Don't talk to me about that Bartok. It was her turbine costing my job back on Plant 13. I'll never forgive her. NEVER!"
—Thor Strindberg to the player

Mr. Strindberg is initially merely brisk and pragmatic, but evidently more concerned with the short-term benefits of an action rather than the potential risks or long-term consequences, as is seen when he rushes to install a new generator part in the Hydroelectric Dam found at Site 13. After the Dam broke, he attempted to shift the blame onto the player and Engineer Peterson, trying to protect himself. He becomes progressively more aggressive and impatient, and is eventually expelled from his position at Site 13 by Rufus Thorne.

In Chapter 3, Mission 2 of the campaign, Strindberg is tasked to help build a war fleet for Rufus Thorne but the fleet was destroyed by F.A.T.H.E.R.'s submarines. This forced Thorne to place the player in charge of Strindberg's job. A string of sabotages followed and the saboteur is later revealed to be none other than Strindberg. Strindberg was captured and sent for disciplinary action for the affair.

As said, Thor Strindberg will be a constant thorn in the player's side whenever he is around. It is made clear that he dislikes the player in nearly every interaction. Even completing quests for him is often met with suspicion. He is incredibly difficult to get along with on any difficulty level. He doesn't like you and won't try to hide it. Nearly everything you do will make him mad.

He offers little for trading, and he has high prices on what he does sell (no items). His settlements heavily reduce the Ecobalance and on his main island the ecobalance will go down to around -900 and can in fact cause Tornadoes even with "Environmental Disasters" set to easy.

Note that after patch 1.05, he doesn't build his first Airport in the first couple of minutes of a session anymore.

On easy difficulty Thor begins and expands quite slowly. His first island will be built up over the course of approximately 2 hours and he won't begin aggressively expanding until after his main island is completely established with around -700 to -900 Ecobalance. He will spread out to at least one or two islands during this time.

While he practically begins with both a dock he is slow to build up a large scale military force. He will not build any airports until a couple of minutes of time has passed during the game session. However by the time his main island is established he will have a fairly strong navy including a Colossus or two. His airforce will not be nearly as developed though with only a few Hawks and Choppers.

If you happen to have Dr. Tori Bartok on your map he will focus all his aggression on her unless you have a sizable military force. Easy is also the only level of difficulty Tori can successfully handle Thor's aggression. Beyond easy she will often be crushed.

At medium difficulty Thor is akin to a skilled and aggressive player who happens to cheat.

He will expand his city at a moderate rate, about as fast as human players do, and he will begin to spread to new islands relatively quickly as well. He pays more attention to the player at this level and will often be commenting about your low taxes and growing population however he won't begin making demands until you start building a military. At that point, if your influence is still at 0, he will often threaten war if you do not listen to his demands.

He will begin building his military within the first few minutes of the game, but will wait with his airforce until a couple of minutes has passed, as he will no longer build any airports early in the game. Choppers will typically first appear somewhere around 30minutes to 60minutes after the session has been launched. While he initially has a large advantage if the player can expand quick enough this advantage can be negated before Strindberg becomes sour and declares war on you. However those who "turtle" will find him rather difficult, at least initially, simply because of his air units.

He will also randomly send Command Ships or Vipers with Detonators to your harbour if you are at war with him. However, those ships will change course when getting attacked at sea.

Again, if you happen to have Dr. Tori Bartok on your map he will focus most all his aggression on her until you have a sizable military force.

Facing Strindberg on hard is like playing against a developer, who cheats, unlocks all items, and hates your guts.

At this level Thor will begin expanding his city and his military immediately after starting. He wastes no time in building a large navy and will expand them almost constantly. Although he will wait with his airforce for a couple of minutes into the game session, when he first does start to build his airports and airforce, he will expand them quickly, and aggressively. While he doesn't begin spreading to new islands any more or less fast than on medium he is far more critical of the player. Everything and anything you do will make him mad and might cause a war. At this difficulty level, it is not uncommon for him to declare war on you outright without any notice prior to his declaration of war.

Regardless of Tori's presence on the map you will have his full, undivided, attention with regards to everything. War with him happens quickly, and it happens frequently.

Although Thor can be provoked into waging war against Tori in the early game by avoiding contact and not selecting his units and largely leaving the map unexplored until you've got enough strength built up for first contact.

In order to compete with Thor at this level the player will not only have to be skilled, but be able to expand rapidly and quickly enough to defend against air raids within the first hour.

Although this will take a heavy toll on your shipping units as his fleets are far larger and superior making easy prey for protected and unprotected ships alike, including submarines.

Interaction with other NPCs[]

"Tori Bartok is young, attractive, has a brilliant mind, and is also reasonably successful. She may only be in her early 20s but she already has everything I've ever dreamed of. In short: I HATE HER!"
—Thor Strindberg

Aside from hating you, Thor also dislikes Dr. Tori Bartok greatly as said and will frequently declare war on her no matter his difficulty level. Since he is designed to challenge the player he can often devastate Tori even when he is a lower difficultly than her.

Going to war against Tori and destroying her vehicles is one of the easiest ways to gain favor with Thor. He will often demand the player stop trading with her and will even request her complete destruction.

Thor Strindberg likes you going to war with Dr. Tori Bartok and destroying her vehicles. He also appreciates making your inhabitants pay high taxes or simply destroying your own high-level Residences.

"Only death... Makes this shame... Tolerable..."
—Thor Strindberg when he is defeated

There are numerous strategies to beat NPCs, but these are guaranteed to work. Pick the first one if you don't mind being cheap, pick the second one if you want to beat him "fair and square".

The easiest ways to defeat Thor (and any computer player) is to simply "lock" the map at the beginning of your continuous game. This strategy exploits two specific AI behaviors:

What this means is if you act quickly and settle ALL the uninhabited islands on the map at the start of your game (without discovering the AI player, of course) - the AI player will simply ignore you while you use your vast empire to build up your military strength. When you are ready to face him (say... after a squad of Sharks and two or three squads of choppers?), then you can "discover" his main island. His defeat will be certain by this point.

This strategy takes some time and patience, but if you want to beat Thor without exploiting the weaknesses in the AI, then here it is.

Note: Even though Thor has Missile Launch Pads, he never uses them, so don't fear that you will become nuked by one of his nuclear missiles.

You are able to use Strindbergs's portrait and his Player Color (Beige) as your in-game appearance by gaining the achievement "Professional Solutions" and thus completing all Single Missions.

We also have his thoughts on his fellow NPCs. 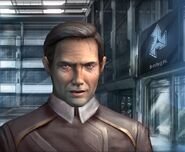 Thor Strindberg in his headquarters 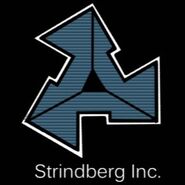